Fun Facts About Beaufort South Carolina You May Not Know

Fun Facts About Beaufort South Carolina You May Not Know 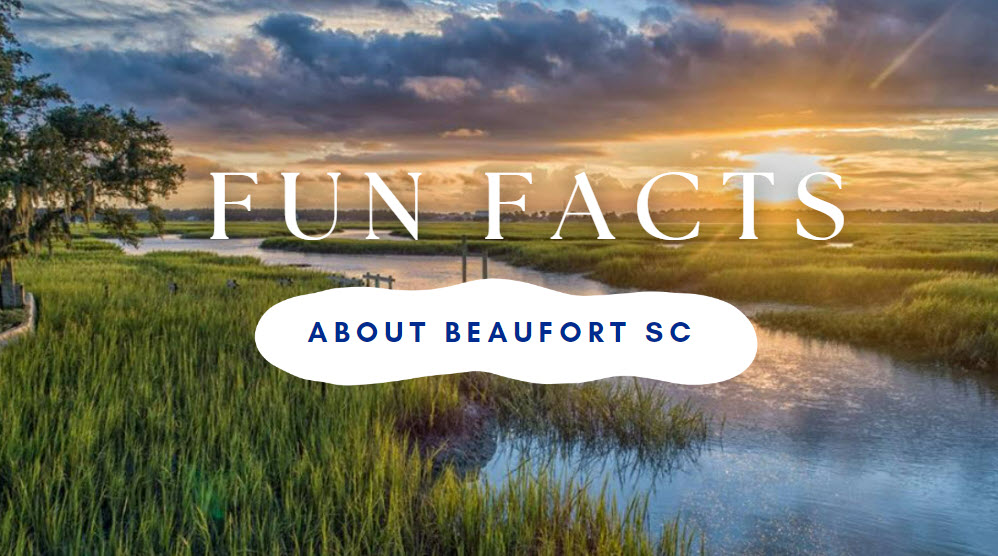 Every city has a story to tell, and Beaufort has many. Today we’re going to go over 8 facts, that even if you’re a lifelong resident, you may not know. So, let’s do a little exploring of our city & county.

1.       Coosaw Island’s Shell Rings- Native American history goes back nearly 4000 years here. The South Bluff History Preserve is home to the remains of four Native American Oyster Shell Rings dating back approximately 4000 years and was the center of the village of a small civilization.  This site is one of the most complex shell ring sites in the United States.

2.       The Forrest Gump Film- Did you know that the Woods Memorial Bridge was pictured in the film as the bridge crossing the Mississippi River during Forrest’s run across the country? Along with the bridge, shrimp boat scenes were filmed at Lucy Creek Landing on Lady’s Island, and Hunting Island State Park was used for the Vietnam War scenes. If you watch the movie, you’ll catch even more glimpses of locations all over Beaufort. How cool is that?!

3.       Beaufort National Cemetery- Opened in 1861 during the early area occupation of the Civil War, it has internments from every American conflict since then. The Spanish-American War, World War I, World War II, Korean War, Vietnam War, and the Gulf War.

4.       Hunting Island State Park- Also known as the most visited State Park in all of South Carolina. Boasting over 1 million visitors per year and ranked as high as #7 on the Top Ten Beaches by Trip Advisor over the years. And why wouldn’t it be, with breathtaking views in a natural environment…it’s still one of the Lowcountry’s favorites.

5.       Cat Island- Did you know that Cat Island was once a nudist colony?! In fact, it was settled in the 1930s to be just that. Although it didn’t last long it was named the ‘Sylvan Sanctuary on Beaufort Isle’ back then.

6.       One of the Oldest Churches- St. Helena Island is home to one of the oldest active churches in the U.S.  The Parish Church, originally established at the colonial parish of The Church of England in 1712, this church has played an important role in Beaufort’s history.

7.       A Lighthouse to Guide- The Hunting Island Lighthouse, which first shone its beacon on July 1, 1859, is a giant beehive of concentric glass prisms. Fitted with a Fresnel Lens, this glorious lighthouse can be seen 18 miles from the shoreline. A true beacon of light for our mariners.

Do you have some fun or interesting facts you’d like to contribute?  We’d love to hear from you. Please feel free to email them to us at sreiselt@gmail.com

More to explore in the Lowcountry coming up. Remember to visit our blogs frequently for real estate information, local events, and fun stuff about the area.

living in the lowcountry